A version of the following Position Paper by Susanne Palzer was presented at InDialogue symposium in Lincoln, UK, on 20 November 2019. 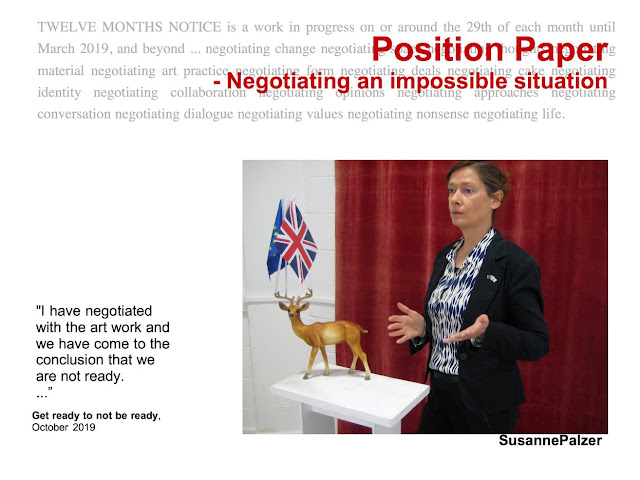 The arts are international and a large number of artists reside or work in a country that is not their country of origin. In this context artist's practices are affected in a myriad of ways, from the practical to the personal, by the UK's decision to leave the European Union. After over three years the question of a future framework is still unresolved, livelihoods and residencies are still in question and for many this has created an unacceptable in limbo situation, often compromising professional practice. 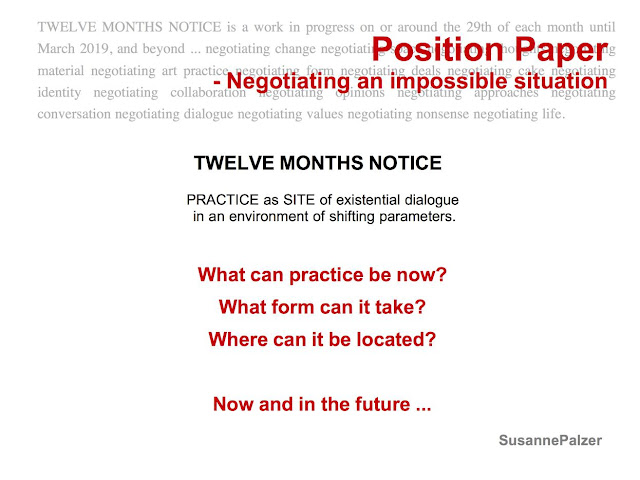 This Position Paper introduces Twelve Months Notice - a project which explores strategies for negotiating a fundamentally changed situation. The Paper is written from a personal point of view but its intention is to open  the dialogue beyond my own position. A dialogue about how artist's lives and practices have been affected and changed since 2016, sometimes radically, and how the arts in general may need to find new positions, now and in the future. 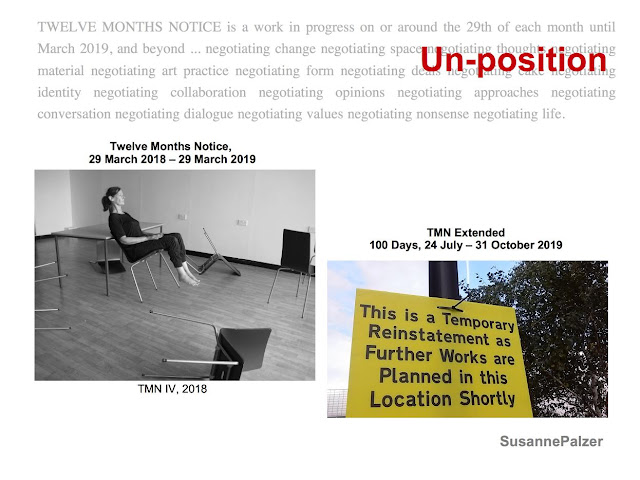 So here we are - in November 2019 - in an Un-position, still not knowing how things will unfold over the next few months and beyond. The UK has not left the EU yet and we are still in a situation of uncertainty.
Twelve Months Notice was conceived to run from March 2018 to March 2019 but it, too, has now completed its own first extension. The dialogue within practice continues as the current reinstatement is provisional. 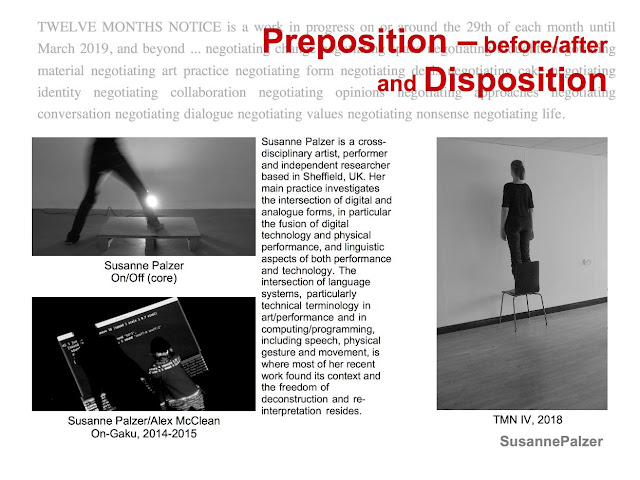 For many years my main practice has been an investigation of the intersection of digital and analogue forms, often deconstructing and translating computational processes into physical performance. After the referendum result in 2016 I continued my practice much as before but by March 2018 I had reached a point where this became impossible. I had underestimated the emotional impact of uncertainty and the looming change of the legal basis of my personal and professional life in the UK. The alignment of political and personal framework had started to diverge, while the trajectories of life and art progressively converged.

For Twelve Months Notice I spent time in a space on the 29th of each months, entering into an existential dialogue with my art practice: asking what practice can be now, what form it can take and where it can be located, now and in the future. This search for adequate forms and expressions experimented with many different media. Looking for ways to communicate also led to dialogue and collaboration beyond the purely personal. At the same time there have been periods of creative arrest when practice seemed not possible. 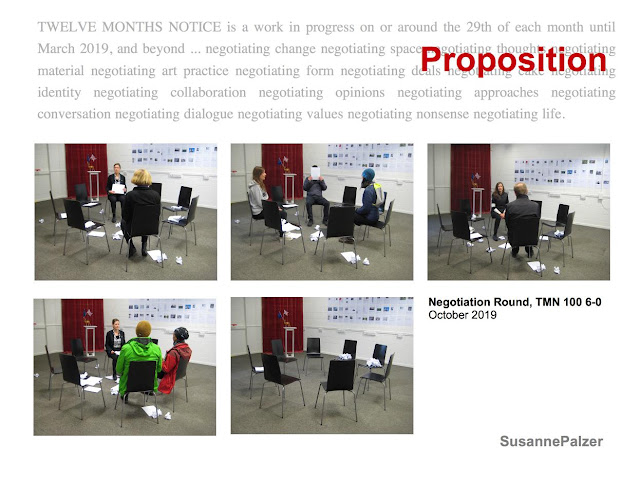 I am here today to advocate togetherness.
I am not here to offend those who hold different views on the subject matter.
Togetherness can be an attitude, a way of thinking. It can be inherent in the act of collaboration, it does not need to be the content of the actual work. Finding ways to work together will counter the increased 'othering' that has and is taking place since 2016.
I do believe we are in this together.

I have had many conversations over the past three years but not many about art practice. I am interested in how artists negotiate the situation. Many artists around me have been able to keep working, many have been able to ignore politics. Others have used work as an escape. Some have addressed issues more directly. Responses and strategies are highly individual and I would like to learn more and hear about your experiences. If you are interested in entering into a dialogue please get in touch. 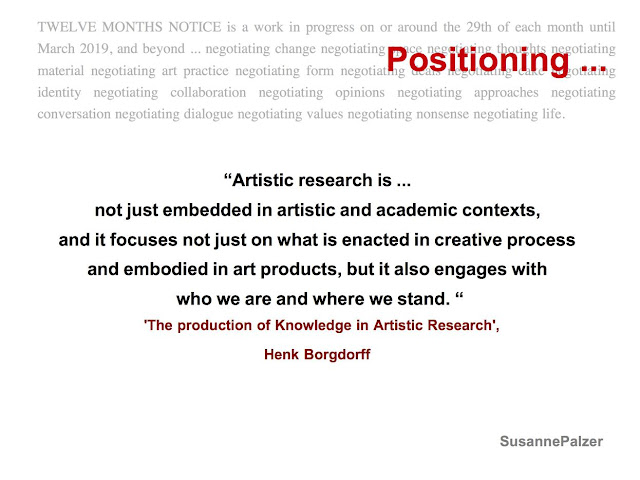 Positioning and subsequent re-positioning implies movement.
Positioning also refers to outside conditions of changing parameters and the need for repositioning.
The following slides will give some examples of the strategies I devised within the framework of Twelve Months Notice and how dialogue within practice manifested. 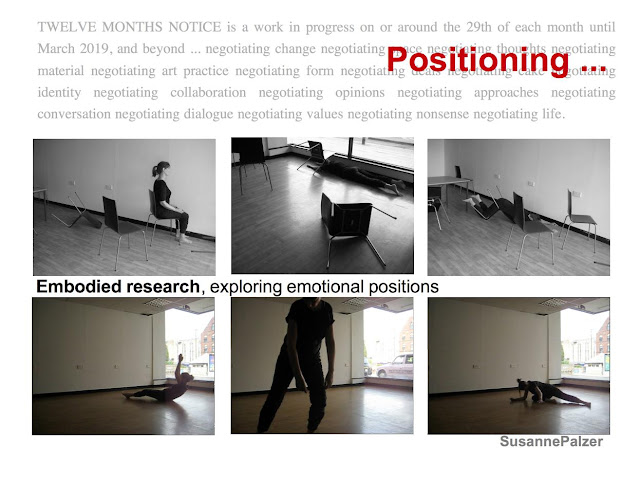 Working with and through the body, exploring emotional positions through physical positioning within space, expressing emotions through movement, using props, staged photography and Butoh dance as tools. 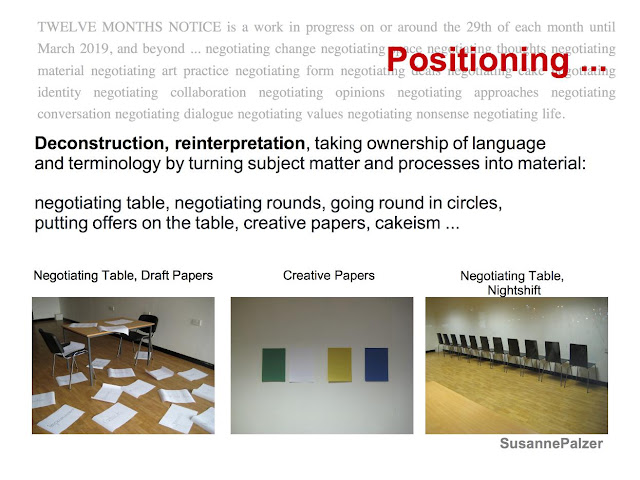 This strategy is very close to my previous practice with digital technology: the approach of analysing and deconstructing processes and language to then re-contextualize and create something new.
Very early on drawing on technical terminology and the language of politics, debate and media, and attempting to abstract and find my own position within the bigger political processes, led to a focus on issues around 'negotiation' - in the widest and most multiple layered sense. 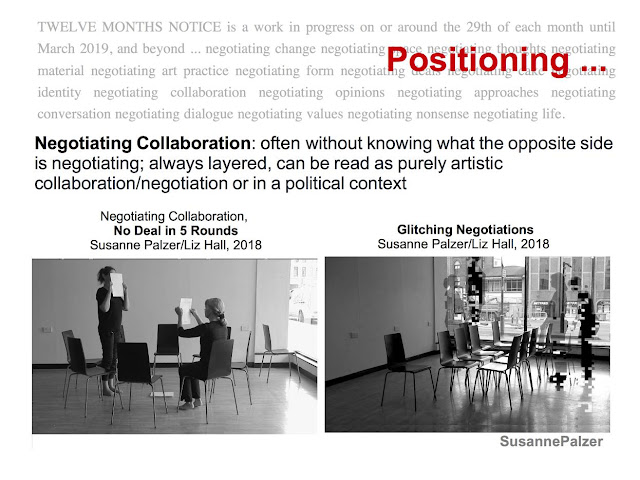 For Twelve Months Notice IV and V I worked with British artist Liz Hall, exploring layers of 'negotiation' within collaboration. Setting only basic parameters, like start and end points for example, we devised several performance pieces in which we were mostly 'negotiating' without knowing what the other's intentions were. It was important to us that the work could be read in numerous ways, through the prism of purely artistic collaboration with all the negotiation this process demands or with an awareness of a possible political subtext. 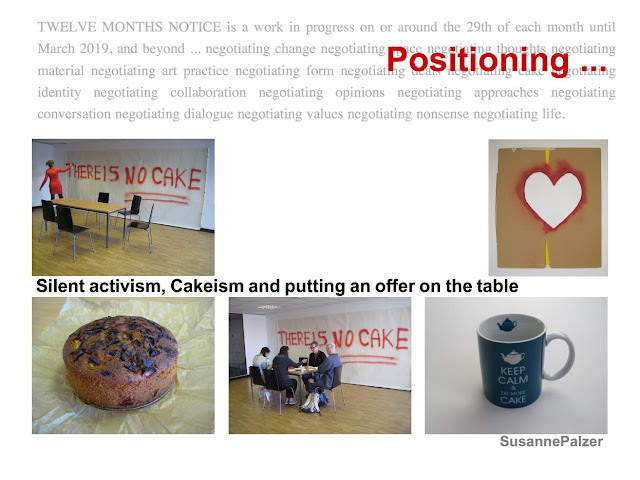 All work for Twelve Months Notice 2018-2019 took place at Access Space Labs, Sheffield. The space an empty shop with a large glass front made TMN semi-public: silent but visible.
For TMN VI we had our cake and ate it after artist Monika Dutta and some British friends put an offer on the table that could not be refused. 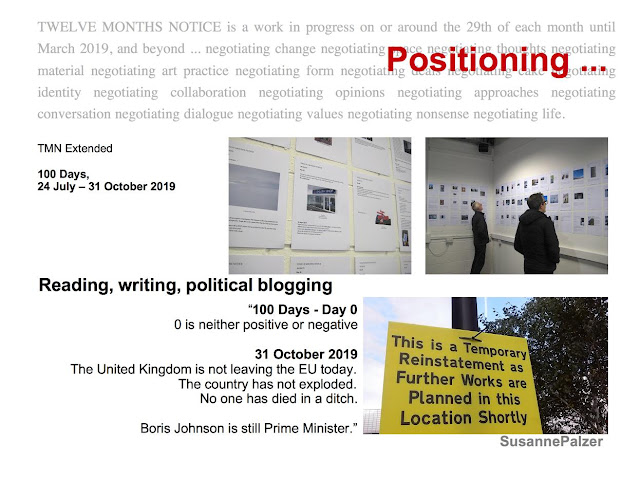 The most recent work I have done was 100 Days. 100 Days of blogging, counting down from the day Boris Johnson became Prime Minister on 24 July to 31 October 2019.  This work was also exhibited in analogue form at Access Space, Sheffield, at the end of October. It was presented with a resonance to political wall posters. And if you decided to read the work in a linear, chronological way you were actually made to go round in circles. 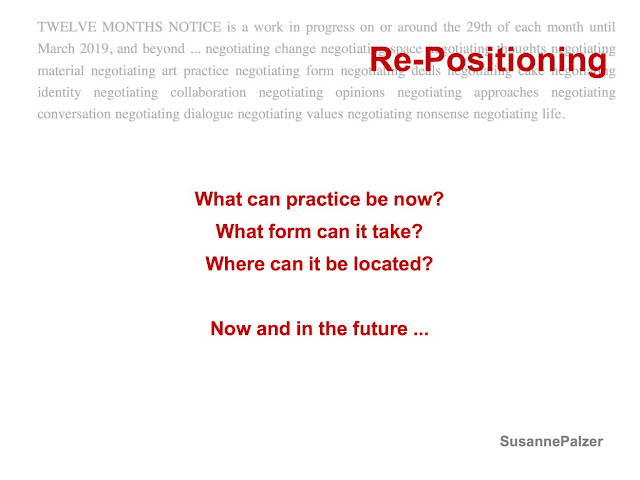 Which brings us back to the starting point. The strategies I developed did help me to maintain some form of practice and I have accumulated a great deal of material. I also have some vision of how to move forward from here.

Nevertheless there are many positions without solutions or resolutions ... but I think sometimes asking the questions is more important than finding conclusive answers. 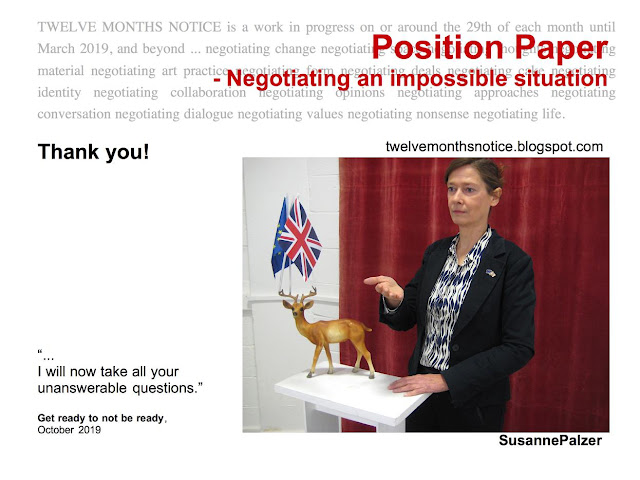